ParaViewWeb, the JavaScript library, is a Web framework to build applications with interactive scientific visualization inside the Web browser. Those applications can leverage a VTK and/or ParaView backend for large data processing and rendering, but can also be used on static Web server like Apache or NGINX, a high-performance HTTP server or even locally with command line based application using your browser.

The all new ParaViewWeb has embraced the next-generation of JavaScript specifications, which allow better code reuse across projects without forcing unnecessary code bloat into the developers application. This capability allows ParaViewWeb contributors to gather all expertise in the form of components, UI, data handling and algorithms for Web-based scientific visualization within ParaViewWeb, the JavaScript library, without any unwanted cost to the end applications leveraging the library. The developer simply extracts the capabilities and features they need, and discard the rest in quickly building their next-generation Web-based application with scientific visualization.

The data model defines how data and components are associated with each other. In ParaViewWeb, we aim to make the simplest, most general data model that satisfy the concrete requirements of the Web-based application with scientific visualization. The common module provides core data model and helpers to intelligently enhance the data model in the presence of certain components and capabilities, which include: color handling, offscreen canvas, WebGL utilities and the various data model extensions to hold the state for a number of visualization components and UI widgets. 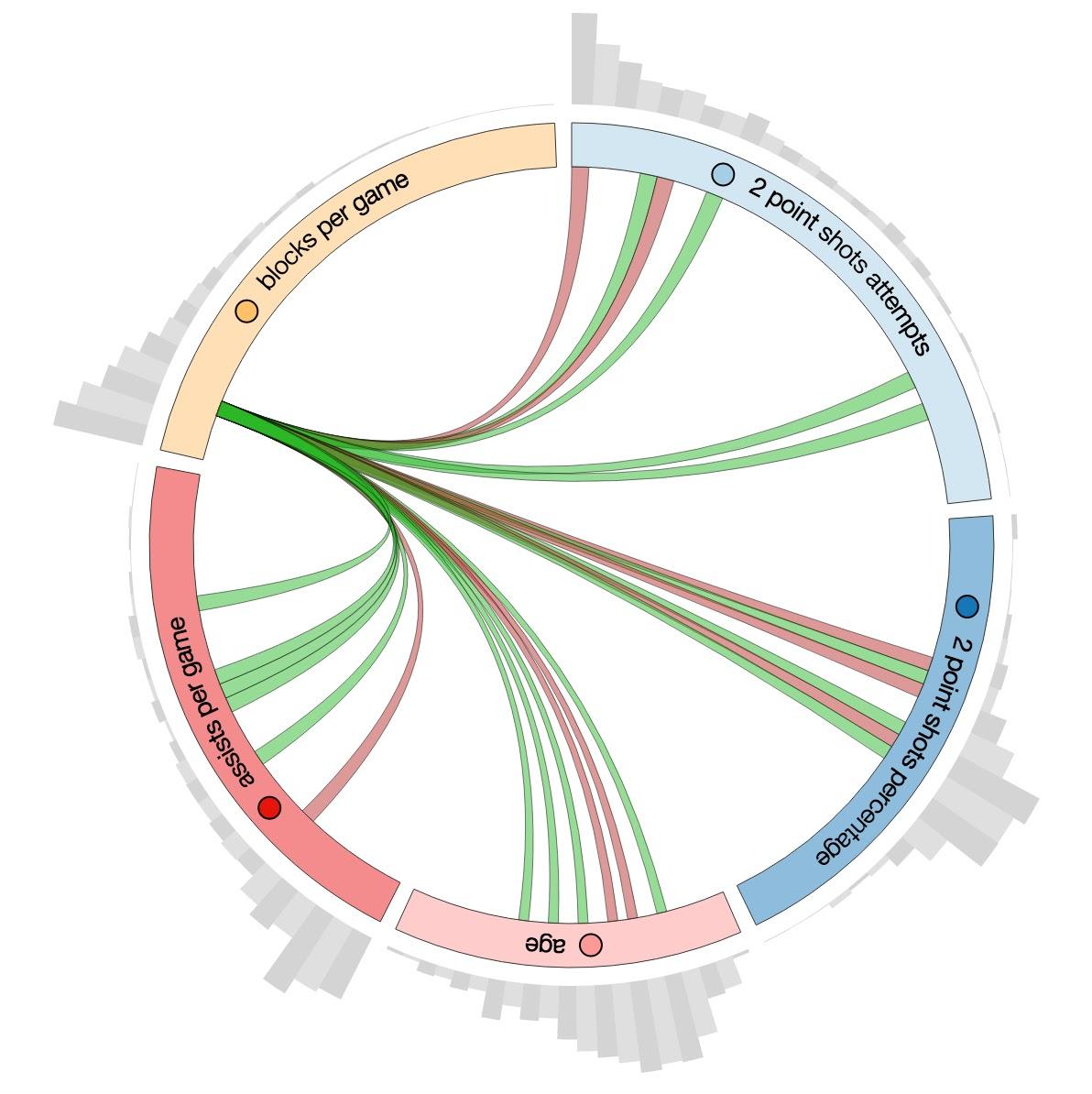 Interactive visualizations are a crucial mechanism for discovery in science, engineering and medical research. These tools enable end-users to: focus on interesting details; customize the content; and modify the visualization, all while enhancing the exploration of large amounts of data. At their best, they facilitate an engaging environment for inquiry. ParaViewWeb’s interaction module, consisting of utilities to aid with user input/interaction, mouse and touch handling, makes it easier for the developer in creating captivating Web-based applications with scientific visualization.

The IO module of ParaViewWeb aims to provide connectivity to various sources of data including the following three main types:

ParaViewWeb helpers use only XHR and WebSocket for the Client based JavaScript (Web browsers). XHR is the main HTTP client built into browsers. XHR (specifically XHR version 2) is implemented in native (C++) code in the browser and exposed as a JavaScript API. For XHR, ParaViewWeb relies on the standard request to fetch data of any kind, but provides a higher-level API for access (i.e. manager.fetchData({ time: 21, field: ‘temperature’ })). WebSockets provides a network connection between the server and the client over HTTP which allow bidirectional communication, and are supported in most browsers today. ParaViewWeb relies on WebSockets to provide a simple interface with Python-based VTK and/or ParaView servers for producing interactive data, geometry and images. Finally ParaViewWeb provides a client for Kitware’s data management system, Girder, to provide a consistent interface to it from within the JavaScript code base.

The Rendering module gathers both rendering viewers and data processing algorithms used for generating images or other types of data structures. This module may be renamed and restructure in the near future since more data processing algorithms are generated as opposed to actual rendering code. ParaViewWeb has image viewers, JavaScript or WebGL image compositing viewers, and WebGL viewers for geometry data structures (see Figure 4). Up to now ParaViewWeb has been using Three.js for handling the 3D scene for WebGL. However, we will begin to migrate away from Three.js to vtk.js as time permits because vtk.js natively supports dynamic geometry data structures.

An example of the data processing algorithms in this module is an algorithm that allows the application developer to slice a 3D floating point value volume to produce an image using a lookup table to convert the numerical values into an actual color. In Figure 5, the application developer uses a multi-view layout component and slices the 3D volume in x, y and z and colors the slices by the temperature field using a spectral lookup table. 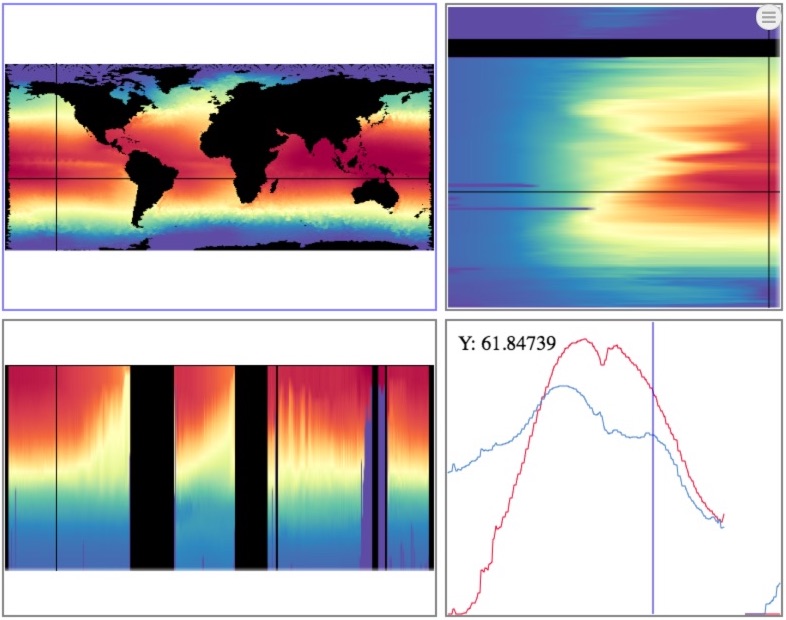 ParaViewWeb is used in many Kitware, Inc. Web projects.

The Visualizer Web application provides a ParaView-like, the Qt application, experience inside the Web browser. The ParaViewWeb library contains all the components needed to build the UI and the data access (I/O) routines to communicate to the ParaView server using WebSocket connectivity. Visualizer is simply connecting all the components together in a meaningful way.

In addition to running Visualizer remotely through as a service, ParaViewWeb provides a nice command line interface so that end-user might utilize Visualizer locally with their locally installed version of ParaView.

The LightViz application aims to provide a simpiler, more intuitive and interactive scientific visualization utility, which could be easily adapted to specific data and tasks. Have we succeeded? It probably needs few iterations between user studies and re-engineering. What it currently does is providing the end-user with about eight simplified modules to ParaView’s most utilized visualization techniques or filters. Modules can be exposed or removed through a json configuration file, and creating new modules from existing ParaView filters is trivial. All the components LightViz requires to build the UI as well as the WebSocket connectivity to the ParaView server is delivered through ParaViewWeb, the JavaScript library. 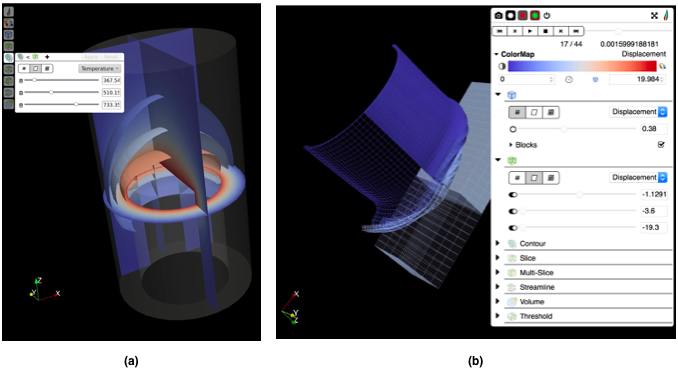 In Figure 7 a and b, We illustrate how easy it is to recast the LightViz scientific visualization application with a new UI courtesy of ParaViewWeb.

The ArcticViewer scientific visualization application breaks the pattern by not requiring a processing/rendering server like VTK or ParaView. In fact, ArcticViewer relies on the data being pre-processed to allow it to be directly read by the Web client. In this use case, ParaViewWeb provides the various data handlers, UI widgets, data access, and rendering algorithms and viewers to drive the application.

Like Visualizer, ArcticViewer can be run for scientific visualization directly from a command line. The various types of data are implicitly understood via a json file, and the appropriate components are instantiated based on the particular type of data. If there isn’t a set of components for a type of data, they can be simply created and added to the ParaViewWeb JavaScript library. ArcticViewer allows the end-user to browse through data products that have been generated in situ or in batch mode to produce interactive scientific visualization this includes data produced with ParaView Catalyst with the Cinema format. It provides viewing methods for images, composite opaque and transparent visualization objects from images, visualization objects as geometry, and complete 3D volumes.

In a recent project, we created DataViewer, a work in progress, which allows the end-user to interact with BigData with ParaViewWeb’s information visualization components and UI widgets. 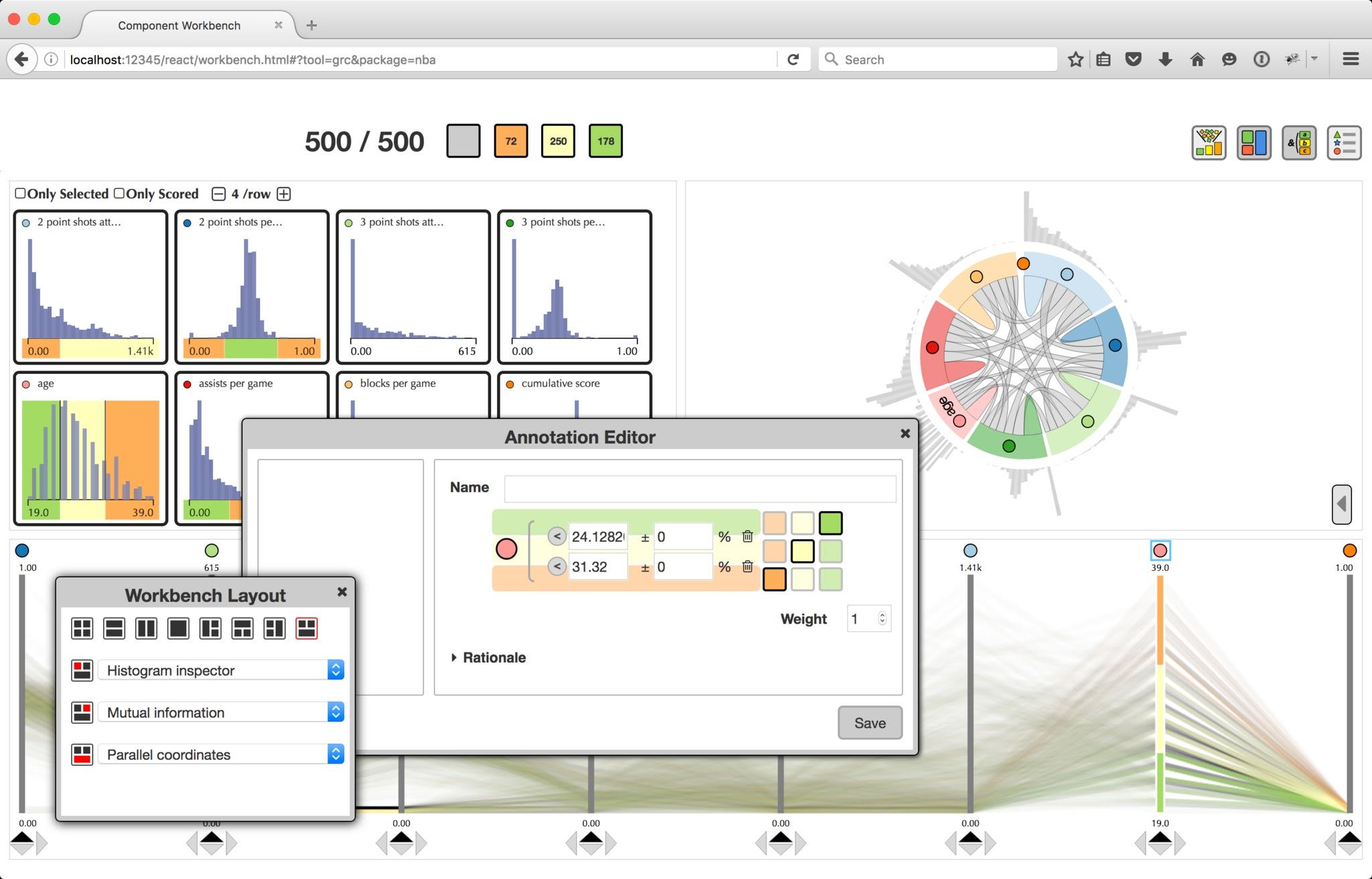 SimPut, as opposed to the previous presented applications, does not provide scientific visualization (it does use some charts). SimPut provides an environment for dynamically generating a UI with various forms of inputs in order to produce a templated output file for a simulation code. SimPut is leveraging from ParaViewWeb its infrastructure to build UI widgets. In addition, parts of the SimPut UI are also used inside Visualizer to create the Proxy Editor Panels. 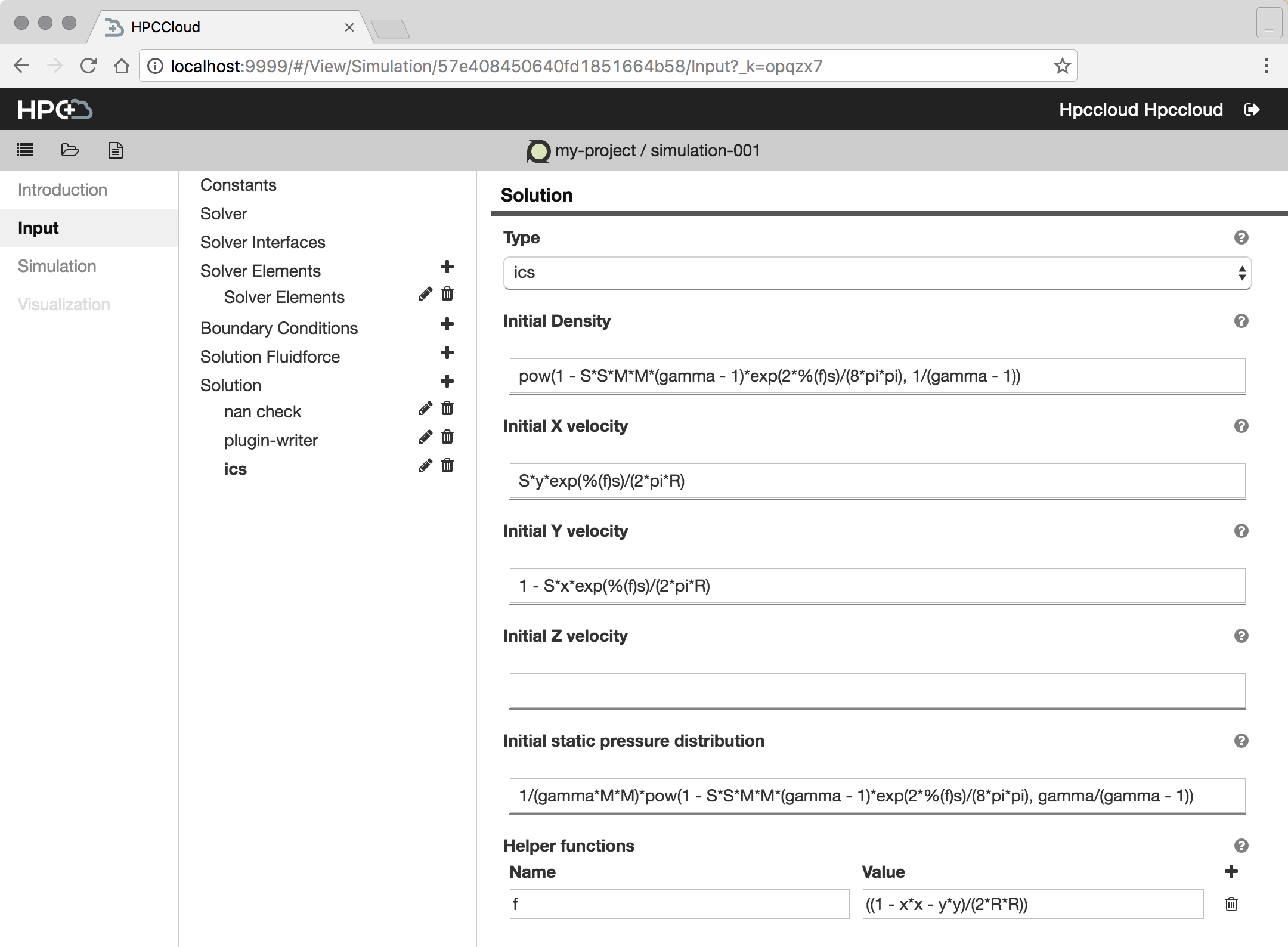 HPCCloud is a web-based simulation environment that utilizes web technologies to deliver an innovative Software as a Service (SaaS) advanced modeling and simulation environment. The platform allows the user to take existing computational code that is designed to run on a high-performance computing (HPC) resource and develop an end-to-end simulation workflow, from input generation right through to post-processing. HPCCloud presents the workflows through a simple, intuitive user interface (UI), which shields the user from much of the complexity that comes with running a simulation code on an HPC resource. HPCCloud utilizes several embedded Kitware, Inc. frameworks. For an example PyFR workflow with three stages, HPCCloud uses: 1) Input generation – Simput, based on ParaViewWeb, will generate an input deck for the simulation. 2) Simulation – The simulation code will run on the Cloud-based HPC or traditional HPC cluster. 3) Visualization – Visualizer, based on ParaViewWeb, will provide the scientific visualization infrastructure. 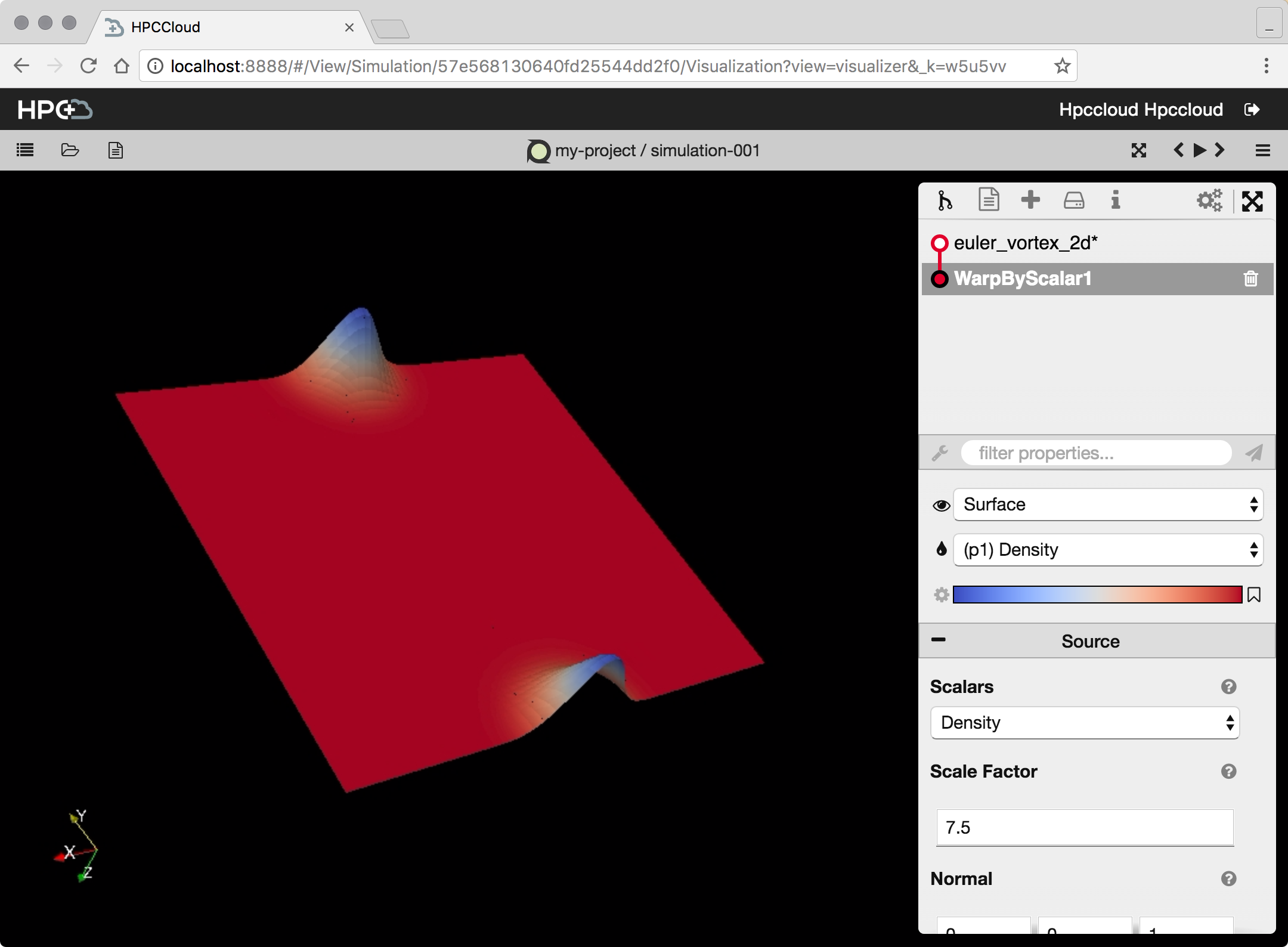 Figure 11: Results visualized with Visualizer within the HPCCloud application.