Currently these messages are text only, presenting the whole information that may be useful to a developer. The current output window has several drawbacks:

As an example we show the output window after an nonexistent variable is typed in the Calculator window. 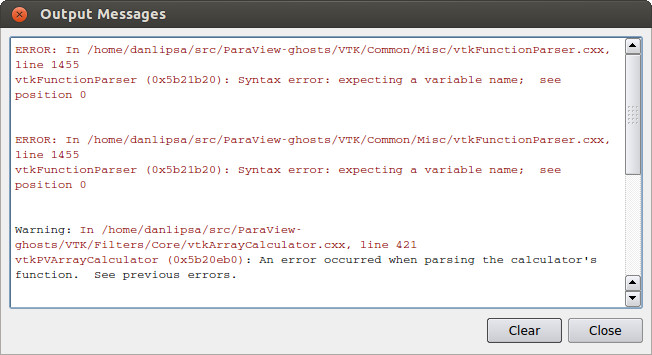 We plan to redesign the Output Window to address these issues as follows. By default, we only show the actual message. We do not show the location of the error or the address. If a message is reported several times, a count is shown reporting how many times the message was repeated. Note that the count is incremented only for similar messages that come one after another.

In the next image, Type represents the type of message (Error, Warning or Debug (Info) - these would be shown using icons), Count shows how many times a message was repeated, Details column will be shown using an icon: > for short message and V for long message. Note that the table header is shown for illustration purposes, it will not be part of the final table.

If a user clicks on a message, the row will expand and the whole information will be shown.

A user can filter the list by message type by clicking on the Filter All drop down menu. Choosing one message type will show in the table all messages of that type and higher. So choosing Warning shows Warnings and Errors but does not show Debug messages.

A user can filter the list by message text by right-click on the message that he wants to be hidden and choosing Filter.

The Clear button clears all messages from the Output Window.